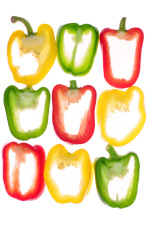 The relationship of one's religion and healthful living traces back to the Levitical Laws on health and hygiene given to the ancient Israelites while in the wilderness of their Exodus experience.  The purpose certainly included the hygiene principles necessary to prevent and combat communicable diseases made possible by such gathering of people who lived and traveled together in the desert environment.  Issues of sanitation were addressed.  Principles of healthful living were emphasized in order to keep the desert travelers robust in body, mind, and soul. Later, fasting appears as a ready remedy for those who sought special powers or healing, for those seeking discernments, or signs of repentance.

Later the New Testament drew attention to matters of temperance or self control,  here again emphasizing the importance of making decisions that would give the believer an advantage in the development of his body, mind, and soul.  The believer who practiced self control would have more discernment, be able to endure hardships, and be in better position to bring under control totally, the body, mind and soul.

Such teachings had been lost over the centuries.  By the 19th century mankind came to a new understanding of the relationship of health and hygiene and the overall health of the population.  The second half of the 19th century saw dramatic increases in the awareness of sanitation and cleanliness, how foods affected health, the uses of water, air, and exercise, in the prevention and treatment of disease.  Various hydrotherapies were introduced.   The consumption of health foods e.g. graham crackers, the introduction of dry cereals, and proper uses of fruits and vegetables were highlighted.  For mental and emotional health, sanitariums came into being which addressed the aforementioned health principles and added the care of gardens and of working outdoors, in an attempt to combat the increase of stress and nervous disorders found in an ever increasing industrial society.

During this time some Adventist church leaders and health professionals assessed the exploding interest in health and hygiene and carefully gleaned principles that were of enduring nature.  By combining the Biblical principles found in the Levitical Laws, the emphasis on self-control, with the emerging health and hygiene principles of the 19th century, the Seventh-day Adventist Church developed a unique teaching for the prevention and treatment of disease, that has stood the test of time.

Seventh-day Adventists saw the body, mind and soul as organs that responded favorably to fresh air, sanitary and hygienic principles. Further, they saw a balance between work and conditioning exercise.  A special emphasis had been placed on self control  issues such as abstaining from injurious tobacco practices, alcohol, the avoidance of patent remedies of the day in favor of natural remedies, the increased care for hygiene and sanitation, and a strong emphasis on plain and simply prepared foods,  all of which came to fuller appreciation in the later 20th century.
The last quarter of the 20th century has witnessed the introduction of health principles for reducing fat and adding high fiber to the diet leading to a light or moderate use of meat and dairy products as preferable.  This very teaching is basic to the Adventist teaching of abstaining from flesh food, the greater daily use of fruits and vegetables, and light to moderate use of dairy products, which in the nutrition world would be advocacy for a Lacto - ovo- vegetarian diet.

The church's 150 years of denouncing smoking is now supported in the scientific understanding of health problems associated with tobacco.  While alcohol is still widely consumed, its deleterious effects are well known in the scientific community.  The identification of natural remedies and reduced patent remedies that did more harm than good, were identified by the Seventh-day Adventist health conscience practitioners many years before science support the theory.  The Seventh-day Adventist mission populations in third world countries are known for their sanitation and hygienic practices, earning the name of "the clean people".

Today Americans sit down to breakfast on dry cereals and various meatless frozen or canned entrees developed directly from grain and soy sources, thus bypassing the need for eating flesh foods.  These foods were first developed in Adventist healthcare institutions and food factories.
Health conscious people of today and those entering the new millennium are demanding a greater understanding of the health and hygienic principles, many of which were either first taught by Seventh-day Adventists or gleaned from the great variety of teachings that have emerged from the past two centuries.

Even in the United States Dietary Guidelines 2005, greater use of whole grains, soybeans, and other legumes are recommended for protein, and the greatest emphasis is placed on plant based foods.   In addition, exercise is recommended side by side with proper nutrition.  The uniqueness of the Seventh-day Adventist health principles is they were far ahead of their times.

*Special thanks to Dr. Joseph P. Stoia, Ed.D. for his literary review on the Seventh-day Adventist health message.