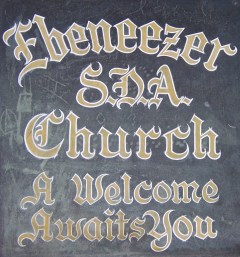 The Adventist Message among the black population of Pensacola, Florida was started in 1909 with a tent effort under the leadership of Elder T.B. Buckner and Elder J. H. Lawrence.  In 1910, the corner of Gadsden and “D” Streets were selected for a church site.  A few dedicated Adventist Christian workers labored day and night to build a church, because they had a mind to work.  They freely gave of their time and talents, rejoicing in their newfound message.

As a result of faith, prayer and diligent efforts the mortgage was paid.  At the time, there were several families committed to keeping God’s commandments, including the fourth commandment, which admonishes the keeping of the Sabbath.

Under the leadership of Elder D.J. Williams in 1969, the church was blessed with Elder Frank E. McGinnis, Sr. who came to us from Oakwood College as a Literature Evangelist and served as head Local Elder.  During this time he conducted tent efforts and radio evangelism.

In 1970, Elder John H. Wagner was pastor in charge.  In 1974, Elder Benjamin Jones came to lead the flock.  Under his leadership, a building site was purchased for $15,000 and paid in full.  The Pastor and congregation began plans for the construction of a new church.  During this time Brother Samuel Dennis, served as Head Elder and Literature Evangelist.  His later departure allowed him to pursue further education at Oakwood University (formerly Oakwood College) in Huntsville, Alabama.  Elder Benjamin Browne, former secretary of South Central Conference, served as our pastor from 1973-75.

In 1978, the Lord blessed us as we became the Pensacola, FL – Atmore, AL District.  During this time, Elder and Mrs. Morris E. Patterson were sent by the South Central Conference to serve as Shepherds of the Ebeneezer flock.  It was the first time was had been blessed to have a pastor reside in our city.  This was a spiritual boost for our members and for the city of Pensacola.  Under the leadership of Pastor Patterson, and through cooperative efforts and persistent struggles, we acquired our present edifice.  This was done through much prayer and fasting!  1275 East Jordan Street became reality.   This facility seats 250, has a furnished kitchen, a brick veneered parsonage and a two-bedroom frame house for rental.  South Central Conference greatly supported our efforts.  The present building was occupied on November 11, 1978.  Constant growth in membership and increased fellowship in the church family was an indication of spiritual renewal.

On February 20, 1982, Pastor Antoine Maycock was introduced to the Jordan Street SDA Church as its new pastor and he continued to encourage the members to improve the Jordan Street building.  Being a gifted carpenter, he offered his services in many areas of work around the church.  His wife, Connie, played an exception role with Women’s Ministry endeavors.  They have 3 children: Jason, Adam and Ashley.

Pastor T.L. Hemingway came to us as a leader (along with his wife) and brought a variety of musical and organizational talents and skills in the year 1986.  He encouraged the members to be “The Caring Church” that the community of Pensacola was in need of.

Pastor Ceasar Monroe, his wife Nadine and their three daughters: Courtney, Candyce and Cara, came to Jordan Street SDA Church in 1987 and continued as pastor until September 1993.  During his ministry in Pensacola, plans were made for in depth renovations of the sanctuary.  A city wide evangelistic crusade was held in 1991 under the direction of Elder Timothy Lewis.

Pastor Roy E. Gaiter, Sr. accepted the call to lead the Pensacola-Atmore District and was introduced to the congregation on September 25, 1993.  He continued to encourage the members in the renovations of the church, as well as in evangelism and community outreach.  Pastor Gaiter and his wife, Janice have 4 children: Julienne, Roy, Jr., Danae and Paul.

Pastor Clifton J. McMillan, his wife, (Annette) and their two children, (C.J. and Jasmine) were introduced to the Jordan Street SDA Church on March 7, 1998 by conference representative, Benjamin Browne.  The McMillan’s brought with them a burden for the importance of stable church families and Christian Education for our children.  They were exemplary in home-schooling their children.  Because of his background in Chaplaincy, Pastor McMillan was most active in community service work, encouraging the church as a body to participate in seminars and workshops that promoted sensitivity towards all who were in need.

Pastor McMillan was especially concerned about the needs of the African-American community in the area of HIV and AIDS awareness.  He was very proactive in getting our church involved in embracing all of God’s people (no matter what their physical condition).  We participated in workshops and sensitivity training to raise consciousness about the needs of HIV and AIDS patients.

In April of 1999, Pastor McMillan facilitated a Family Life Workshop for the church members and the community.  A Revelation Seminar was also held and our church hosted the Disabilities Ministries Retreat/Seminar in 2001.  In November of 2002, the Liberation Revival under the leadership of Pastor Stafford was the “one thing” that the members talked about.  It involved fasting, prayer and Bible study.  Pastor McMillan brought a life of enthusiasm to the Pensacola Church.  His dynamic sermons will be remembered for their recurrent theme: “Be Faithful!”

In August of 2003, Pastor Gary S. Collins and his wife (Loretta) were sent to shepherd the Jordan Street flock.  We were happy to welcome them as our leaders.  Pastor and Mrs. Collins came to us with enthusiasm and a vigorous spiritual desire to assist in answering God’s call for winning souls.
A few weeks after their arrival, we celebrated the 95th anniversary of the existence of our church (formerly Ebeneezer Seventh-day Adventist Church) on September 20, 2008.  We had been worshipping in our current location for 25 years.

Pastor Collins shared with us his “vision” for growth and spiritual development at Jordan Street.  Around the church, it was not unusual to see banners and signs bearing the words: “I SEE IT”.
Because of his vision and the strong commitment of the members, we saw the construction of our first parking lot and the opening of Jordan Street Christian Academy in the Educational wing.  Funds were also being raised for the planning of a Family Life Center. (Extensive renovations were completed due to damage from Hurricane Ivan).

However, on August 25, 2007, Pastor Collins preached his final sermon before moving to another district.  “The Benediction” was a profound and encouraging message of hope.  During the transition between pastors, (September 2007 through March 2008) the Elders and Deacons very capably kept our church moving in a positive direction.   Under the guidance of the Holy Spirit and the leadership of our own South Central Conference, we prayed much for our next leader.  During this time, (retired) Pastor Willie J. Lewis served as interim pastor.  He and his wife brought encouragement and always the straight testimony of the gospel.  During Pastor Lewis' service to JSSDAC, Elder Wm. Andrew Sykes was very instrumental in assisting with the leadership of our church while Pastor Lewis was away.