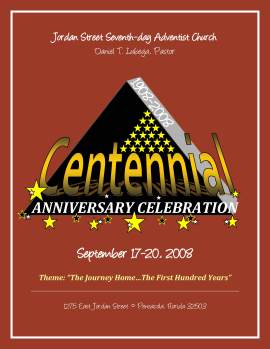 On September 17-20, 2008 the JSSDAC Family celebrated its 100th Anniversary.  The theme was "The Journey Home...The First Hundred Years".  Under the direction of Pastor Daniel T. Lubega and the Anniversary Celebration Committtee, the Centennial Celebration created memories that would last another 100 years to come.  We were blessed with the presence of former pastors, members who had relocated across the country, numerous songs of praise, uplifting prayers and powerful sermons.

In addition, we were blessed with in house talent that was able to document the event to formulate what became our Centennial Anniversary Celebration booklet (see image on right).  This project developed into an 80+ page full color publication that detailed our history in the Pensacola area, the growth of JSSDAC and our current ministries.  If you have not had a chance to view or own one of these booklets, you are definitely missing out on something special! Be sure to visit our photo gallery displaying pictures from the Centennial Anniversary.