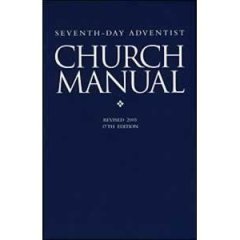 Why does the Seventh-day Adventist Church have a Church Manual?

God is a God of order as evidenced in His works of creation and redemption. Consequently, order belongs to the essence of His church. Order is achieved through principles and regulations that guide the Church in its internal operations and in the fulfillment of its mission to the world. In order for it to be a successful ecclesiastical organization at the service of the Lord and humanity, it needs order, rule, and discipline. Scripture affirms that "all things be done decently and in order" (1 Cor. 14:40).

Ellen G. White pointed out such needs in 1875: "The church of Christ is in constant peril. Satan is seeking to destroy the people of God, and one man's mind, one man's judgment, is not sufficient to be trusted. Christ would have His followers brought together in church capacity, observing order, having rules and discipline, and all subject one to another, esteeming others better than themselves."--3T 445.

But Church leaders did not quickly produce a book of rules for Church governance, even though the General Conference met annually in session during the Church's early years and delegates voted on matters of church order and life. Finally, in 1882, the General Conference in session voted to have prepared "instructions to church officers, to be printed in the Review and Herald or in tract form."--RH, Dec. 26, 1882. This revealed the growing realization that order was imperative if organization was to function effectively and that uniformity in order required its guiding principles to be put into printed form.

However, when the proposal to place the articles in permanent form as a church manual came before the 1883 General Conference session, delegates rejected the idea. They feared a manual might formalize the Church and take from its pastors their individual freedom to deal with matters of order as they desired.

But this fear-doubtless reflecting the opposition that had existed 20 years before to any kind of organization--evidently soon lessened. The annual General Conference sessions continued to take actions on matters of order. Though the Church officially declined to adopt a manual, leaders from time to time gathered together in book or booklet form the generally accepted rules of church life. Perhaps the most impressive was a 184-page book published in 1907 by pioneer J. N. Loughborough entitled The Church, Its Organization, Order and Discipline, which dealt with many of the topics now covered by this Church Manual.

As the Church worldwide grew rapidly in the early twentieth century, it increasingly recognized the need for a manual for worldwide use by its pastors and lay members. In 1931 the General Conference Committee voted to publish a church manual. J. L. McElhany, later president of the General Conference, prepared the manuscript, which was published in 1932.

The opening sentence of the preface of that first edition observed that "it has become increasingly evident that a manual on church government is needed to set forth and preserve our denominational practices and polity." Note the word preserve. This was no attempt to suddenly create and impose upon the Church a whole pattern of church governance. Rather it was an endeavor first to preserve all the good actions taken through the years and then to add rules required by the Church's increasing growth and complexity.